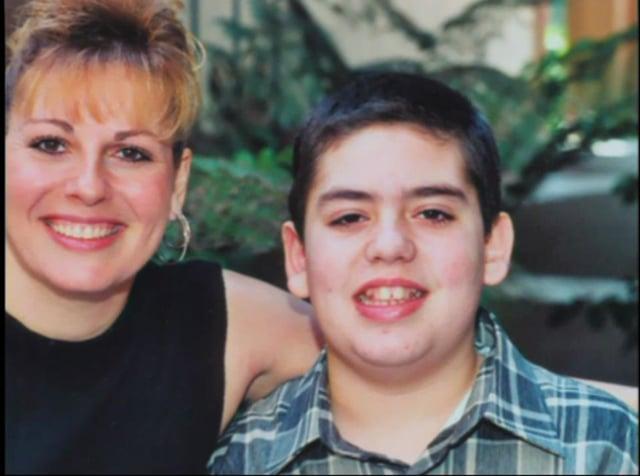 Christopher lives with his parents and three brothers. He has a diagnosis of Rasmussen’s Encephalitis. This is a progressive neurological disorder which, in Chris’ case, is characterized by intractable seizures, atrophy of the left hemisphere of his brain, partial paralysis of the right side of his body, and progressive cognitive impairment. In other words, Chris has developmental disabilities, which include Intellectual Disability, Seizure Disorder, and psychomotor impairments.

Chris first displayed evidence of weakness on the right side of his body when he was about three years of age. He had surgery for an arachnoid cyst on his brain, at age four. He was able to enter regular elementary school, but experienced his first grand mal seizure at age seven. As his condition continued to progress, he began attending special education classes. When his hospitalizations and recovery periods made it necessary, he received home schooling.

He has taken several anti-convulsant medications, which partially controlled his seizures. Shortly after this video was made, Chris had a left hemispherectomy (removal of one side of the brain) to limit the progressive effects of his disease and to achieve better control of his seizures.

Chris needs support in his self-help skills, due to limited use of his right hand. He is able to do some things, such as feeding himself, dressing, tying shoes, etc., independently, though he needs some extra time to complete these tasks. Due to his seizure activity, he cannot be left alone.

Chris’ parents are very proud of his ability, overall, to accept his limitations, and maintain a very positive and cheerful attitude most of the time. During more difficult periods he can become upset and stubborn, and has had brief physical outbursts, which may be a result of damage to the frontal lobe of his brain, or medication side effects, as well as frustration.